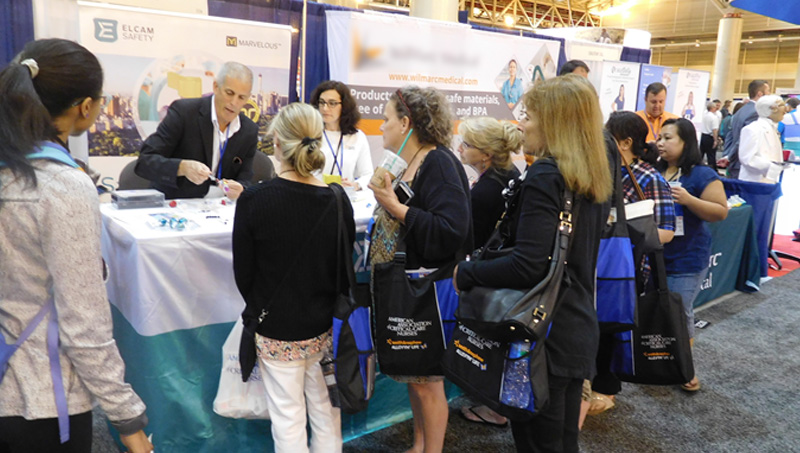 Elcam attended two conferences during May 2016; AACN and WCNA. These events were a great opportunity for Elcam’s marketing, sales and product teams to go out for direct feedback from the market, with both conferences hosting various stakeholders, including doctors, practitioners, teachers, administrators, researchers, manufacturers and consultants. But most important of all, these two conferences are a dedicated opportunity for Elcam’s teams to meet the main segment using the company products - nurses.


The team from Elcam medical, the developer and manufacturer of MarvelousTM stopcock, had three objectives when attending these two leading conferences.

The event took place in New Orleans from May 15th to May 19th, 2016, the exposition accompanying this conference starting on May 17th [1].


The organizers state that over 8,000 attendees were present. For Elcam the conference was a great success, as the booth was well visited. Nurses who attended a MarvelousTM demonstration in the Elcam booth seemed rather impressed with the self –flushing presentation and asked if it was something that could be included in the arterial lines. Nurses also wanted to know if the product was available to use for IV applications as well.  ICU Nurses recognize the specific advantages of MarvelousTM for the ICU – for closed systems, A- line standard systems and CVCs.


Visitors to the booth were also exposed to Elcam's new Tritan™ integrated stopcock and connectors which are developed in collaboration with Eastman. According to Eastman (Tritan manufacturer) , TirtanTM is a stronger and more resilient material that allows for less cracking compared to lipid resistant polycarbonate and it is expected that it will prove especially reliable for use during administration of lipids and aggressive drugs, increasing both patient and staff safety by reducing drug leakage and exposure to drugs and blood.


Tritan™ is also BPA –Free and the BPA-Free theme was also discussed at the AACN conference. Controversy regarding the toxic effects this substance may have on people has led to its removal from many consumer plastic products (such as baby bottles), and the medical industry is following suit as the FDA changed its position on the subject of BPA safety in 2010, expressing “some concern” regarding the effects of BPA on the brain [2].


The conference main theme was "courageous care"[3, 4], addressing the need for nurses to not only take care of their patients, but also to take care of themselves. Sequentially, many of the sessions and talks during the conference dealt with the subject of creating and sustaining a healthy working environment in the ICU. Another theme, related to the main theme was empowering bedside nurses to develop a stronger voice in the care of their patients, voicing their professional opinion and advocating care methods.

The 12th World Congress of Nurse Anesthetists (WCNA) took place in Glasgow this year, from May 13th to May 16th [5].


Anesthesia is a potential field for products that can improve safety of practice such as Elcam’s MarvelousTM, the luer-activated stopcock that improves safety during intravenous fluid regulation  by providing a closed system , minimizing inadvertent drug residues administration and reducing stopcock manipulations.  Elcam also showed the new Safe2 Rotator (available as a connector or integrated in a stopcock), which reduces the risk of disconnections and consequent blood loss, bacteria ingress and air embolism, increasing patient safety and care levels.


Although WCNA is a smaller event, with about 500 attendees, an estimated 20% of them visited the Elcam booth. Among the visitors to be impressed by MarvalousTM was a member of BARNA, the British Anesthetic & Recovery Nurses Association. The show is very focused on the anesthesia market and is therefore a solid step in the effort to raise awareness to Elcam products in this field and in Europe.