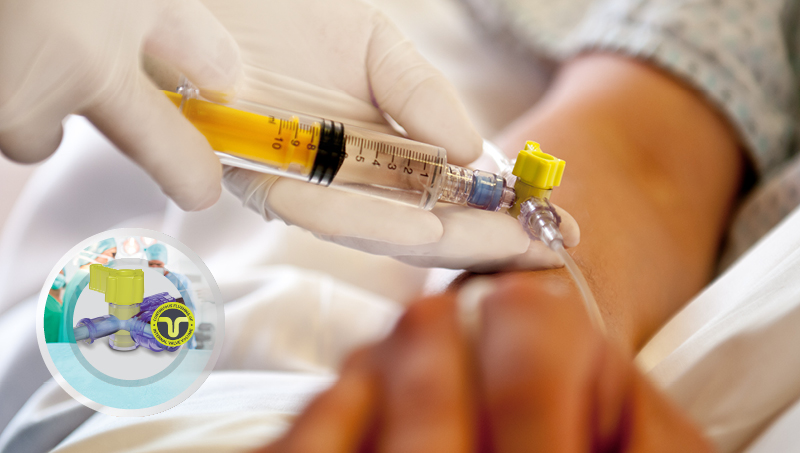 A mixed reputation for stopcocks
Stopcocks have a mixed reputation among medical staff who use them. On the one hand, the device simplifies infusion, blood sampling and drug administration routines and is included in many standard procedures, even if usage guidelines vary in different areas of the world. (For example, in Europe the stopcock is mainly placed on each vascular access device (VAD) lumen for recurrent use, whereas in the USA stopcocks are mainly placed for temporary and specific use only.)


On the other hand, research has validated the concern of increased risk of intraluminal contamination when using stopcocks and their contribution to catheter-related bloodstream infection (CR-BSI). Some institutions have gone as far as recommending not to use stopcocks. In The 2011 Infusion Nursing Standards of Practice this recommendation is followed by a call to give attention to the addition of sterile caps to ensure a closed system (pS31). In The 2016 Infusion Therapy Standards repeats a similar recommendation but adds that a stopcock with integral needleless connector (NC) should be chosen to reduce stopcock contamination (Ps72).


Improved stopcock design based on research
The predominant themes in stopcock research are stopcock contamination and its impact on CR-BSI and fluid flow dynamics through multiple stopcock systems.  In the last 20 years many studies have compared open and closed stopcock lumens and looked at infection during operations. Despite studies that demonstrated a significant trend toward reduced intraluminal contamination when the stopcock is closed with an NC, using a bonded NC on the stopcock is not yet common practice. Contamination is not only caused by stopcocks use, other sources of contamination found in studies in OR settings include bad hygiene habits as a major culprit.


Stopcocks are devices used to direct the flow of fluid through an infusion system, while allowing multiple fluids and even multiple unit (manifold) to be connected. Therefore watching flow rate and direction is important when researching the efficacy and safety of these devices. Flow rate is especially critical with drug administration. It is influenced by factors such as system volume, and carrier fluid flow dynamics. Researchers recommend that the drug be connected with a stopcock at the closest point to the patient.


The technology of stopcocks is improving to reduce the identified risks of contamination and flow issues. Stopcocks must meet many healthcare industry regulations, on topics such as flow rate, high- or low-pressure resistance, and chemical resistance to lipid-based solutions, as well as sterilization, dead space, and handle-rotating torque. Stopcocks are also offered in a manifold design, connecting a few stopcocks in a straight line. Stopcock design can be adjusted in accordance with habits of use in diverse locations worldwide. Stopcocks are branded and available in many colors and materials, depending on their targeted use.


Recently, this variety of devices and stopcock usage were expansively reviewed in a published article in The Art and Science of Infusion Nursing magazine. The article, called Stopcocks for Infusion Therapy - Evidence and Experience, was written by Lynn Hadaway, MEd, RN-BC, CRNI® and includes a comprehensive report regarding stopcock technology and characteristics, literature review results (published clinical stopcock uses, clinical and laboratory studies, open vs. closed stopcocks, stopcock contamination in the OR, flow rate concerns, blood sampling systems, miscellaneous studies), a survey and discussion of stopcock use. This publication elaborated on stopcock use in all patient ages and in virtually all health care settings, including inpatient, outpatient, and alternative sites.


Lynn Hadaway, the IV therapy expert discusses how the benefits of a closed stopcock design that allows for continual flushing of residual medications such as the MarvelousTM can reduce the risk of contamination.
Lynn Hadaway Med, RN-BC, CRNI is a published infusion expert with 40 years practical expertise. She knows all the risks and all the devices. In her report she discusses how the innovative design of a stopcock such as MarvelousTM – with its minimized dead space can help reduce the problem of intraluminal contamination.


In her integrative literature review and clinician practice survey analysis of published evidence and reports of actual practices with stopcocks, Hadaway writes that “Dead space is an issue with stopcocks…A new stopcock design that has eliminated this problem allows fluid from the primary flow pathway to flow into and out of this space in a U-shaped pattern, flushing out trapped air bubbles or residual medication”. She then continues to present a figure of constant flushing of the side port.


She summarizes her review and closes it with the following remark: “Because of the extreme importance of infection prevention, ensuring standardization of stopcock practices throughout the entire facility is necessary. Further reduction of stopcock contamination could be achieved with the use of a stopcock design that allows for continual flushing of residual medications. Finally, maintaining a closed system by using a stopcock with bonded NCs would reduce the significant risk of intraluminal contamination that leads to CR-BSI.”


The article by Lynn Hadaway, MEd, RN-BC, CRNI, provides a combination of literature review and clinician practice survey in a complete report of stopcock use in addition to suggested practice changes for reducing the risks associated with stopcocks usage. She mentions the advantages of a reduced “dead space” and “continuous flushing” – features Elcam is proud to have integrated into the design of MarvelousTM  from the day it was developed.