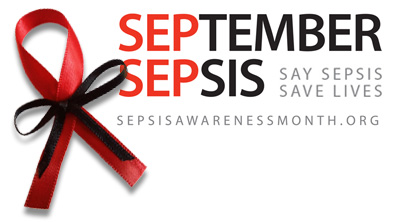 Why should we devote a full 30 days in September to spread the word about what sepsis is and what it does? To save lives and make a difference in patient outcomes. Sepsis contributes to as many as 50 percent of all U.S. hospital deaths, in spite of the fact that it is present in only one in 10 patients, according to the American Thoracic Society. One of the best known yet most poorly understood medical disorders, sepsis is most commonly defined as a severe infection associated with organ dysfunction.

Despite extensive research on sepsis incident and mortality, there is still no clear understanding of the condition’s overall impact on mortality rates. So Sepsis Awareness Month matters. Every year in September, awareness events and medical conferences are held around the world to educate both the general public and healthcare professional about sepsis, primarily to ensure it is treated as a true medical emergency.

A study by lead author Vincent Liu, M.D. of the Kaiser Permanente Northern California Division of Research sought to quantify the national impact of sepsis on hospitalized patients and to highlight the importance of sepsis care on mortality at a population level.

That said, the message from Sepsis Awareness Month is: while research into new treatments for the condition appears to have stalled, the medical community must still find a way to change its response to this life-threatening condition. Researchers, clinicians and policymakers need to radically rethink the way they are researching and diagnosing sepsis.

So what can hospitals and other healthcare facilities do now to protect patients from sepsis?  Researchers at the Brighton and Sussex Medical School in the United Kingdom suggest:

Point number three puts the spotlight on central venous catheters (CVCs), which, as you know, are vital for the care of hospitalized and critically ill patients, as they provide reliable venous access for clinical activities such as infusion of medications, hemodynamic measurement and blood sampling. However, they are also the leading cause of healthcare-associated bloodstream infections (BSI) frequently implicated in life-threatening illnesses like sepsis. Hub colonization and intraluminal migration of infection have both been recognized as a common cause of sepsis.

Stopcocks, used for injection of medications, administration of IV infusions and collection of blood samples, represent a potential portal of entry for microorganisms into vascular access catheters and IV fluids. Stopcock contamination is common, occurring in 45% and 50% of cases.

But a solution lies with the development of luer-activated stopcocks with an inner circumferential channel, which continuously and repeatedly flush the CVCs to prevent the buildup of residue, greatly reducing the risk of infection and offering a first line of defense in shielding patients from sepsis.

A luer-activated valve (LAV) serves as a bacterial barrier, allowing access to the line without opening it and thereby maintaining a closed system that reduces bacterial ingress and consequent microbial contamination.

The fluid flow around the stopcock handle creates a unique circumferential channel that reaches the entire internal volume of the valve. Constant flushing of the side port with main line carrier fluid minimizes dead space and prevents stagnation, which, based on the results of several studies, can reduce the risk of bacterial colonization and ultimately, sepsis.

If you’d like to learn more about how luer-activated minimal residual volume  stopcocks can reduce the risk of sepsis in your patients, we’d like to offer you a complimentary copy of Elcam Medical’s white paper: Marvelous - New clinical evidence

Access yours today, and we’ll see you next time “In the ICU.”