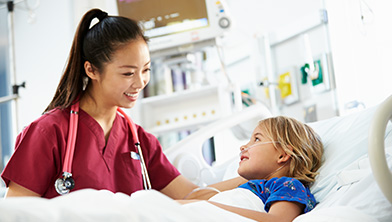 A nurse and her patient reunite, 38 years later
There’s been a fair amount in the press lately about the nursing profession, ever since Miss America contestant Kelley Johnson chose to recite a monologue about her role as a caregiver for the talent portion of the event. Her performance drew ridicule from the hosts of the morning show, The View, which evoked a compassionate response from nurses across the US and prompted show sponsors such as Johnson & Johnson to pull their commercials from the ABC talk show.

Apologies from the hosts came, but damage to the show was done.

Another nurse was in the press recently, albeit in a much quieter way. It’s a story we wanted to bring to your attention in case you’d missed it, because it beautifully illustrates the life-changing care nurses regularly provide, whether they are in the ICU or not.

Her name is Susan Berger, and one of her first patients in the pediatric recovery room at New York’s Albany Medical Center in 1977 was a baby named Amanda Scarpinati. At only three months old, Amanda had rolled off a couch and landed on a steaming vaporizer, the hot mentholated ointment burning her skin so badly that she would suffer years of painful reconstructive surgery, and significant bullying from her classmates.

“I remember her,” Ms. Berger told reporters recently. “She was very peaceful. Usually when babies come out of surgery, they’re sleeping or crying. She was just so calm and trusting.”

A series of black and white photos taken of the two for the hospital’s annual report that year comforted Amanda as she grew. They showed Berger holding the heavily wrapped baby in her arms, and in the middle of all the bullying and painful procedures, looking at the pictures of this woman “who seemed so sincere, caring for me” helped Amanda cope.

She’d always wanted to find out who that nurse was, but a previous effort had failed. Now, all these years later thanks to the power of social media, Amanda shared the pictures online and they went viral almost immediately. After a former fellow nurse at Albany recognized Ms. Berger, caregiver and patient recently met and shared a moving reunion.

“Preserved by the photos,” one news article recently shared, “their encounters in the pediatric recovery room turned out to have a lasting impact on both their lives.” And perhaps the lives of many others hearing this story, coverage of which you can access here.